When men were sent to the space by some space stations like NASA, Soviet, they found that normal ball-pens were not working on space. It means we can’t write anything with a ball-pen in space. So the space station NASA spent years and millions of dollars to develop a pen that could function in space. But on the other side Soviet used their cosmonauts Pencils to write in space.

Ball-pen functions on the principle of surface tension. A pen is fitted with a tiny ball bearing in the tip of it. As we move the pen along a paper, the ball rotates picking up ink from the ink cartridge and leaving it on the paper. It means the ink is stored in a tube and when the ball rotates the ink comes out from the storage and placed in the paper. Here a question arrives….why the link comes out down? Because of Gravity. 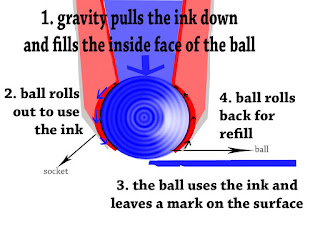 CAN WE USE PENCIL IN SPACE?

Earlier the Soviet as well as NASA used to use the normal wood pencil in space to write. But normally pencils are made of wood, so it can burn due to the graphite particles as the graphite in the pencil core has a tendency to cause explosions. And also to use a pencil in space in order to keep their details, the astronauts had to keep sharpeners and erasers with them, which were too tiny and too problematic to carry. That’s why they were looking for an alternative to the pencil as the pencil posed many threats in space. 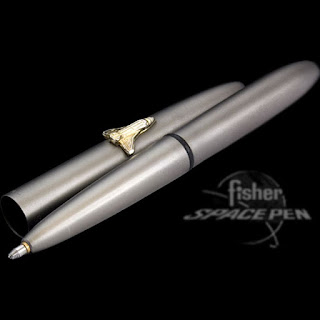 The Fisher Space Pen is a gas-charged ball point pen that works in zero gravity, vacuum, underwater, over wet and greasy paper, at any angle and in a very wide range of temperatures. The space Pen or the Zero Gravity Pen is marketed by Fisher Space Pen Company. This pen uses pressurized ink cartridges.

The American industrialist and pen manufacturer Paul Fisher invented the retractable and pressurized pen in 1965, called the Anti-Gravity 7 (#AG7) that works flawlessly in zero gravity. The first zero gravity pen was used by the astronaut of the first manned Apollo mission in 1968. 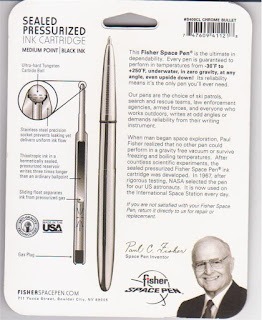 WORKING PRINCIPLE OF THE SPACE PEN

The ballpoint is made from tungsten carbide and is precisely fitted in order to avoid leaks. A sliding float separates the ink from the pressurized gas. The thixotropic ink in the hermetically sealed and pressurized reservoir is able to write for three times longer than a standard ballpoint pen. The pen can write at altitudes up to 12,500 feet (3800 m). The ink is forced out by compressed nitrogen at a pressure of nearly 35 psi (240 kPa). Operating temperatures range from −30 to 250 °F (−35 to 120 °C). The pen has an estimated shelf life of 100 years.

An urban myth-ball point pen do work in zero gravity or in space. Spanish ESA astronaut Pedro Duque tested out the myth in 2003 by taking a ballpoint pen into space and writing in his diary with it:


I am writing these notes in the Soyuz with a cheap ballpoint pen. Why is that important? As it happens, I've been working in space programmed for seventeen years, eleven of these as an astronaut, and I've always believed, because that is what I've always been told, that normal ballpoint pens don't work in space.

"The ink doesn't fall", they said. "Just try for a moment writing face down with a ballpoint pen and you will see I'm right", they said.
During my first flight I took with me one of those very expensive ballpoint pens with a pressure ink cartridge, the same as the other Shuttle astronauts. But the other day I was with my Soyuz instructor and I saw he was preparing the books for the flight, and he was attaching a ballpoint pen with a string for us to write once we were in orbit. Seeing my astonishment, he told me the Russians have always used ballpoint pens in space.
So I also took one of our ballpoint pens, courtesy of the European Space Agency (just in case Russian ballpoint pens are special), and here I am, it doesn't stop working and it doesn't 'spit' or anything. Sometimes being too cautious keeps you from trying, and therefore things are built more complex than necessary.