WARNING : This is for those, who are interested to know the work mechanism of grenades. Grenades are being used for military purpose, these are not for personal use. This article is not to harm anyone, rather it is for distributing knowledge.

First modern hand Grenades were developed in China, during the Song Dynasty (960-1279 AD). In China the name of the weapon was Zhen Tian Lei. Chinese military Joseph Needham developed the prototype of the modern hand grenades. They used to pack gunpowder into ceramic or metal containers to make a hand grenade. 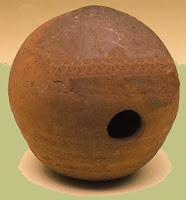 Every grenade has a safety pin and to use the grenade the safety pin has to be removed. In case of Time Delay grenades, after removing the safety pin, the grenade take some time to blast. Generally it takes 5-7 seconds to blast.
In the battle of France in 1940, the used grenades were fitted with a seven second fuse. But this proved to long, giving defenders time to escape the explosion or to throw the grenade back, so the delay was reduced to four seconds.
And This is the biggest lack of this type of grenades.

When the safety pin not removed :

This is the inner diagram of a Time Delay grenade. Here you can see, that the Striker is compressed by the Striker spring, and the striker is connected or rather hold in its position by the Striker lever. Now when the Safety pin is removed from its position, the striker lever detached with the striker, and the striker hits the Percussion cap in very hing speed. So there generates a spark, and by the spark the Chemical delay starts to burn. After 5-7 seconds fire touches the Detonator. Detonator is a material which blasts, and the grenade blast as it is filled with very high Explosive material.
By changing the materials or compositions of the chemical delay we can control the time delay after removing the safety pin.

But this not so safe for the military who is using this, so the Impact grenades were developed.

This type of grenades doesn't take any time to explosion.After removing the pin, when the grenade strikes in a solid surface, it outbursts. But to blast this grenade, it should be thrown in a very high speed. So mainly Grenade Launcher is used to hurl the grenades in battle

This is the inner diagram of an Impact Grenade. This grenade is thrown by a grenade launcher, and the Impact trigger of the grenade strikes in a solid body or surface. Then the Firing pin is directly hits the Percussion cap. In this hitting process, fire is generated, and the detonator explode. The Weighted pins are there to hold the detonator in a fixed place. When the detonator explode, the whole grenade blasts, as it is filled with highly Explosive materials. The Flight fins gives the grenade a better construction to go and strike on it's aim. 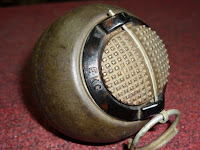 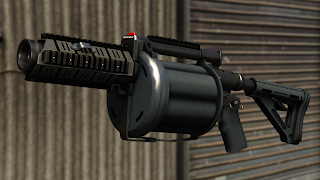 This type of Grenades are quite safe for user, as they use a gun like grenade launcher to hurl the grenades.
Labels: WORK MECHANISMS