From the very beginning we know that light is a wave. A wave travels through a medium. But it was found that light can travel even through vacuum or empty space. Before Einstein, scientists thought that “ether” is a thing which is present everywhere in this universe, even in the empty space or vacuum. That’s why light can travel through vacuum. But Einstein said that the whole concept about ether is meaningless. Rather he proposed that light has a dual-nature.

The wave nature of light says how light can bent. In 17th century, Isaac Newton believed light is composed of a stream of corpuscles. Then a Dutch physicist and astronomer Christiaan Huygens thought that light is a wave vibrating in some sort of ether.
Some experiments like diffraction, interference, refraction etc. proves that light has a wave property.
Wavelength is the parameter which can differentiate between waves. In case of refraction we can differentiate mediums by their refractive Indexes. The Refractive Index of every medium is different. It is defined as
n = c/v

The fundamental particle of light is photon. We can define light as a packet of photons. Photon is a mass less particle but it has energy. It was first found by Albert Einstein in his Photoelectric effect experiment. In this experiment a high energy photon strikes a metal surface and an electron is ejected from the metal and the photon disappears. When the frequency of the light increases, the speed of the electron being ejected, increases. This experiment shows the particle nature of light.
The energy (E) of photon is defined as –
E = hf
Where,   h = Plank’s constant
f = frequency of the light 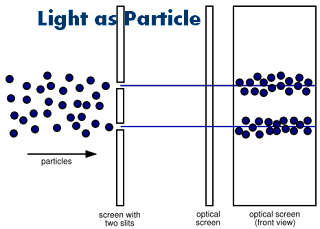 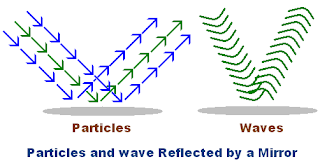