⦿ (3) There after, a simple model was proposed in 1514 by a Polish priest, Nicholas Copernicus. His idea was that the sun was stationary at the center and that the earth and the planets moved in circular orbits around the sun. Nearly a century passed before this idea was taken seriously.

⦿ (4) Then two astronomers - the German, Johannes Kepler and the Italian, Galileo Galilei - started publicly to support the Copernican theory. The death blow to the Aristotelian/Ptolemaic theory came in 1609.
In that year, Galileo started observing the night sky with a telescope, which had just been invented. When he looked at the planet Jupiter, Galileo found that it was accompanied by several small satellites or moons that orbited around it. This implied that everything did not have to orbit directly around the earth, as Aristotle and Ptolemy had thought. 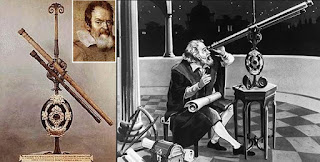 At the same time, Johannes Kepler had modified Copernicus's theory, suggesting that the planets moved not in circular paths but in elliptical paths (an ellipse is an elongated circle). The predictions now finally matched the observations. As far as Kepler was concerned, elliptical orbits were merely an ad hoc hypothesis, and a rather repugnant one at that, because ellipses were clearly less perfect than circles. Having discovered almost by accident that elliptical orbits fitted the observations well, he could not reconcile them with his idea that the planets were made to orbit the sun b magnetic forces.
⦿ Later Sir Isaac Newton published his Philosophiae Naturalis Principia Mathematica in 1687, probably the most important single work ever published in the physical science. Newton postulated a law of universal gravitation according to which each body in the universe  was attracted towards every other body by a force that was proportional to a quantity called their mass and inversely proportional to the square of the distance between them. He also put forward a theory of how bodies move in space and time.
Newton realized that, according to his theory of gravity, the stars should attract each other, so it seemed they could not remain essentially motionless. Would they not all fall together at some point?
In a letter in 1691 to Richard Bentley, another leading thinker of his day, Newton argued that this would indeed happen if there were only a finite number of stars distributed over a finite region of space. But he reasoned that if, on the other hand, there were an infinite number of stars, distributed more or less uniformly over infinite space, this would not happen, because there would not be any central point for them to fall to.
Labels: UNIVERSE